The 2021 Inaugural Parade is a procession of the newly sworn-in US President, Vice President, and their families. After the Swearing-In Ceremony and benedictions, a luncheon is held for the newly sworn in administration. Following the luncheon, they will gather at the East Front of the US Capitol and travel down Pennsylvania Avenue. Marching bands and armed forces personnel accompany them on their march down the avenue as they commemorate this 59th inauguration of the President of the United States, finally arriving at the north end of the White House.

Extremely limited parade being planned for the 2021 Inauguration

The Inaugural Parade is part of a long standing tradition of honoring our newly sworn in President and Vice President. Due to the COVID-19 pandemic the parade will be much smaller than the past, and no tickets will be distributed to the general public. You can read more about the changes in the official Biden/Harris Inauguration FAQ.

Plans are marching ahead for the 2021 Inaugural Parade, with organizers building out the usual infrastructure we’ve come to expect to see. Officials state that plans are being made to scale the parade down due to the COVID-19 pandemic. More details are expected in the coming weeks.

In 2017, the parade ran for about 2 hours, and parade participants were estimated at around 8000. Included in this parade were 40  organizations including first reponders, veteran groups, as well as each arm of the military.

Anyone can watch the parade for free, but there typically are restricted general admission standing areas as well as restricted general admission bleacher seats that require a ticket to access. Inaugural Parade tickets will be available in various areas along the parade route through your House or Senate Representive. Tickets will also be available to order through InauguralTickets.com!

See here for more information about the Inaugural Parade

Here is the 2017 Inaugural Parade lineup 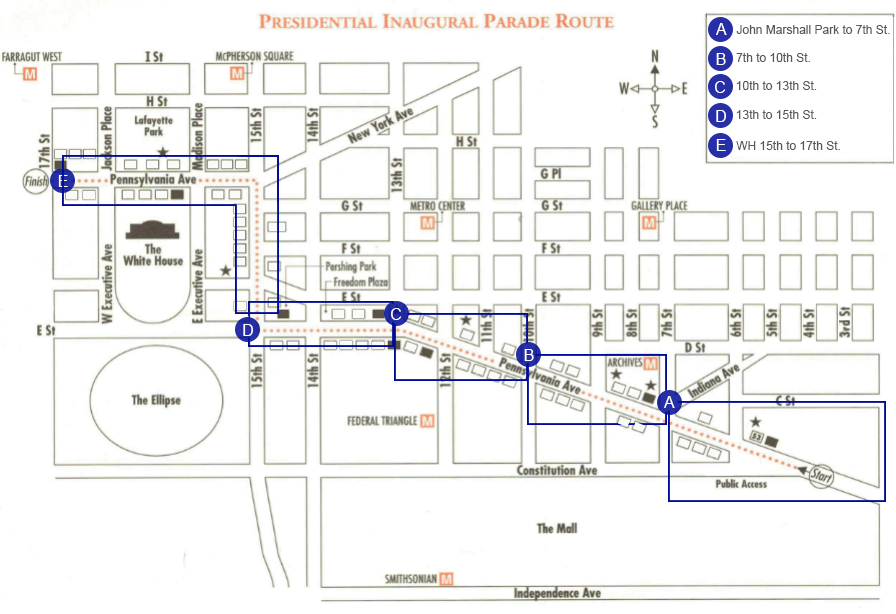 NOT FINDING THE ANSWERS TO YOUR INAUGURAL PARADE QUESTIONS?